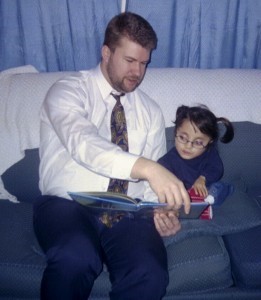 Another repost from the old OI blog, this one about my husband, from six years ago.

My daughter’s father is my ex-husband. When I left him 12 years ago, she was five years old, and very emotionally attached to her father. She was too young to understand what was going on, too young to see the bad situation we were in, far too young for me to explain to her the complicated necessity of starting a life without him.

For many years, I have bitten back the urge to tell her the whole story, all the ugly details that contributed to the mass of forces pushing me to this decision. There’s much she knows now, but much more she’ll never know. But the core of the reasons for leaving, the reason that pertains to her, is that my ex- resisted dealing with her disability. (This is awkward because I don’t want to be unkind, and this is not a hate-fest.) From the time she was born, all he could express was sorrow, regret, pity, an inertia and disconnection that left her completely in my hands. She was truly physically and philosophically in my hands, since he never picked her up to hold her once in those five years. Doctor visits, school planning meetings, insurance negotiations, child care decisions, church, transportation, adaptive equipment, therapy–all of it was my responsibility. Along with working full-time. He never had a full-time job the entire time we were together.

I’ve married again. Nine years ago this April I married Mr. Currell, who has known me since I was 13 years old. We dated in high school. Knowing him so long helped, but I was very nervous about bringing this stranger into my daughter’s life. He may know me, but what did he know about OI? What did he know about caring for a disabled person? What could he possibly know about being a parent to a special needs child? She was so tiny, so vulnerable, so sad and confused by losing her father. This interaction had to be managed very carefully.

The first moment anyone meets my daughter, my eyes are on her. When she was really young, she clung to me constantly, burying her face in my neck when anyone spoke to her. Rare was the individual who could draw her out of her shell; one preschool teacher touched her heart, one babysitter/aide, one family friend. When they connected with her, her face opened like a flower blooming suddenly in the sun, all light and energy and joy. She loved them instantly for making her laugh, for making her feel safe.

But most people scared her. She shied away from looking at anyone directly, preferring the safety of my arms.

Bringing into her life this man I knew but didn’t know was frightening for me. I knew this man was not just a dalliance, someone I’d have a few laughs with. He was, as they say, a “keeper”, someone about whom I was serious, someone who was determined to make a life together. There was much at stake.

I arranged for him to meet the kids at our house on the Friday night before our big Saturday date. Mr. Currell solemnly shook hands with my then-9-yr-old son, then turned to my daughter and introduced himself. She was helping me make cookies, and they talked for a little while. He made her giggle, which I saw as a good sign. Then my son challenged him to a game of chess, and we wiled away the evening.

The first thing Mr. Currell asked when the kids were out of earshot was how he would go about picking my daughter up. No one outside of the paid para-aide had ever asked that, not my friends, not my family. Not her father. When we all went out the next day to an event I had to cover for my newspaper, Mr. Currell was all-hands-on-deck, handling the wheelchair like a pro, finding accessible entrances, hanging out with the kids while I conducted the interviews. And once, under my watchful eye, he picked her up.

If you’re an OI mom or dad, you know exactly how nerve-wracking it is to have an outsider pick up your little one. Your heart is in your throat, you’re ready to pounce the moment a single limb is unsupported, you watch the lifter’s body mechanics like a drill-sergeant PT.

Mr. Currell took his time, respectful of my daughter’s comfort and security, and safely transferred her from one seat to another. He wasn’t nervous, he wasn’t concerned about himself in the least. His only concern was that she was comfortable.

And that was the end of any internal negotiations I had left. He was in.

Since that day, Mr. Currell has grown into the role of OI dad. He has transferred, repositioned, assisted in seating decisions, sat in on PT consults/FAPs/IEPs, doctor visits, IV sticks, meetings with anesthetists. He learned all the legal verbiage, the medical language, and the lexicon of the special needs parent. He learned how to lift her when she was broken, and then he learned how to splint. He helped me manage the worst fractures (I wouldn’t step aside on those) when she was screaming in pain. He arranged to work from home and be my childcare provider when I lost the only reliable caregiver I could find, and for almost a year, he was Mr. Mom to children he wasn’t even legally responsible for.

In that time, he became their Dad.

But the moment he became on OI Dad, the truly transformational moment, was when my daughter had her first surgery. It wasn’t even an orthopedic surgery. Leading up to the surgery, he was calm, dedicated, constant, while I was jumpy and frightened. In the pre-op room, he joked, smiled, stroked my back and held my hand as I struggled to maintain composure. He kissed my daughter’s nose as she was wheeled out of the room, and then we waited.

After the four hour surgery, (my four hour torture session in the waiting room) he was the first one by her side. He saw her puke on the anesthetist (for which she groggily apologized, sending relieved laughter around the room), and came out with tears in his eyes to where I was talking with her surgeon. For the rest of that hospital stay, he didn’t leave my side–or hers–until he was kicked out by hospital staff. And that has been true for every single surgery since that day. And every fracture. And every parent-teacher conference.

There’s nothing new in the statement that biology doesn’t make a man a father. But becoming an OI parent is a rare and frightening thing to do. To be an OI parent takes a certain amount of steel, of sheer willpower, a fortitude in the face of unimaginable pain that allows you to continue doing your job as a parent while you watch your child suffering. That’s not a skill that comes naturally to many people, certainly not (forgive me) to most men, who crumple at the sight of a little girl’s tears.

But Mr. Currell is not most men. He is a rare and steely individual, who brings strength and perseverance to every task he decides to undertake. I’ve seen him do some amazing things, but the most inspiring thing he has ever done, right before my eyes, was to become an OI Dad.