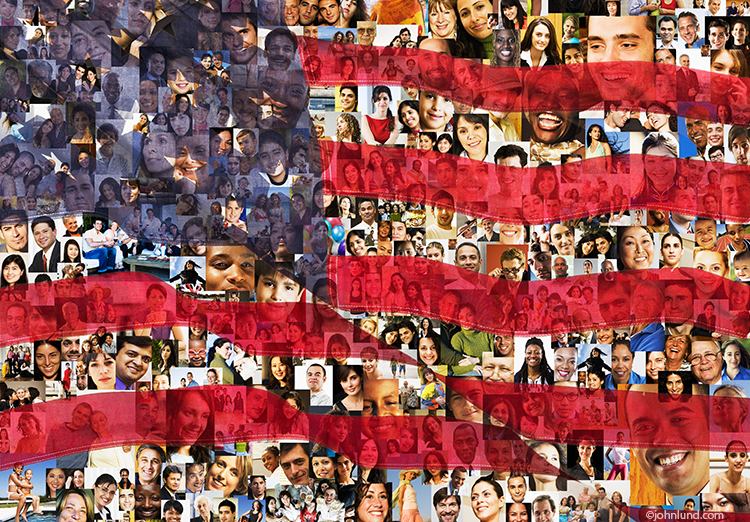 I’m married to an immigrant.

Until recently, I never saw it in those terms. I mean, Tim’s from Canada. He came here when he was 12. I don’t think in terms of him having emigrated from Canada, he just got in a station wagon with his mom and siblings and drove across the border into Minnesota, which is Canada Lite. It’s a blurry border there, and it seems that no one cares much who’s Canadian and who’s not. Maybe I’m wrong about that.

But still, he’s an immigrant.

I’ve been married to two immigrants total, being now on my second marriage total. I plan to stop here. In my first marriage, as I’ve mentioned, I was married to a Fulbright scholar from the Philippines. We met at the school of music at my university, where he was studying jazz performance. He didn’t have any intention of staying here, a fact he reminded me of repeatedly later in our unhappy marriage. My getting pregnant changed his plans.

With the Fulbright Scholarship came a J-1 visa, which has a home-residency requirement. After his studies were over, my then-husband, Benjamin, was supposed to go home for two years. Because the Fulbright is funded by both the U.S. and the country the scholars come from (in this case, the Philippines), the scholars are required to leave the U.S. for two years. This rule is in place because the U.S. wants to avoid the perception that they’re “buying” talent from other countries. That rule always seemed silly in our case. As if the U.S. would be interested in buying jazz bass players.

There are plenty to choose from within our borders.

After a lengthy appeal based on the hardship posed by the birth of our daughter, Benjamin’s two-year home residency requirement was waived. He became a permanent resident.

Through the lens of these two marriages, I’ve seen my country differently than my childhood perception allowed.

I’m the child of a U.S. Marine, raised in fervent patriotism, where criticism of the government was allowed but only in grumbling undertones, never voices raised in protest. My parents believed the hippies protesting in the 60s and 70s were bad news. My parents were pro-Ronald Reagan and anti-Carter. My mother had a particular problem with Asian people; having been a child during World War II, she was aware of the Bataan Death March (oh, the irony!) and other horrible things done by the Japanese, and so was resentful toward all Asian people.

As I got older, it occurred to me that she never mentioned a problem with German people for what they did in World War II. I often wondered if that was because her mother was part German. I don’t know. But it struck me as weird.

When I was pregnant and discussing marriage to an Asian man, my mother was keenly opposed to the idea. The pregnancy was bad enough, but the fact that I had gotten involved with an Asian man was just too much for her. She tried to talk me out of marriage by telling me that Asian culture is deeply patriarchal, that the Philippines is a predominantly Muslim country, that women are treated horribly there, and that the cultural differences would be too much to handle.

Now, Asian culture has a history of patriarchal norms, imported in part by colonialism, but the Philippines has always seemed to break from that tradition. And she was wrong about the Philippines being Muslim; again, due to colonialism from Spain, the Philippines is largely Catholic. And my then-husband was from a large Catholic family, something I thought would help my mother overcome her bias. It didn’t.

There was a big cultural difference that was eventually too large to bridge; he was a professional musician and I wanted a stable life for the kids. We never could make that work.

Benjamin’s upbringing in an American colony (“500 years of Spanish rule, 50 years of Hollywood”, he used to say) gave him a very different view of the U.S. He saw how our family organization shoved out elderly people, who were revered in his home. He hated our American diet, with its dependence on convenience foods and ignorance of vegetables and healthy grains. He was contemptuous of our confidence too, aware as he was of its connection to dangerous arrogance abroad.

Things that I just took for granted as positive American character traits he saw as sprawling disrespect for the rest of the world.

From him, I learned that people in areas colonized by the U.S. are treated often as commodities. I was hurt by his dismissal of my home, my passionate if awkward motherland. I reminded him frequently that his children were half American, as if that might soften his disregard.

I saw him struggle with being dark-skinned in a country where whiteness is prized. I watched him seethe at the implicit requirement that he treat white people he met on the street with deference, despite his obvious and earned superiority as a scholar and musician. I was afraid of what would happen if he lost his temper, unaware at the time of the tremendous effort it took to contain. But I don’t think I understood the depth of rejection he felt in this country.

My marriage to Tim has challenged me to consider my country more consciously, and as a Canadian, he has some predictable views on the U.S. He believes in stronger gun control, stronger constraints on free speech, and knows first hand the benefits of single payer health care.

I suspect that if he hadn’t come to the U.S. as a child, he would never have come at all, because the flaws of this country are too great for him to choose this place willingly. Nevertheless, he is an immigrant, and his assimilation into this culture has been unremarkable. He’s a big blonde, green-eyed guy with little discernible accent, unless he’s north of the border or talking aboot hockey.

I have stood my ground as an American against the critique from the Great White North, because I’ve always believed he didn’t have a full understanding of what it means to be American. Because my conviction about this country is that its massive size, topographical variety , and wildly different population from coast to coast are exactly its strongest attributes. That diversity is also what makes governing so hard here, and makes things like free speech and gun control nearly impossible to legislate at the federal level. This is a massive steamer ship, and steering it is a herculean task.

But now, I see there’s a huge segment of society that believes that this country is white.

That it is only one thing, and that one thing is white people.

And that the problem in this country is people of color. People from other countries. People with brown skin topping our borders to steal and rape and usurp our “whiteness”.

This is not what I have ever thought of our country, and I am baffled that there are people who think this way.

On Twitter recently, someone posted something like “many people see the U.S. as a white utopia, and the last two decades have threatened this belief.” That helped me understand a little more how anyone could vote for someone who is so clearly a white supremacist.

What’s clear to me, though, watching anyone defend the current president*, is that this country that I believed in so ardently, this place that I saw as a refuge for anyone in trouble, this massive ship that has room enough for zydeco and cowboy hats and plump Midwesterners and tan/skinny Californians–that this place isn’t what I thought it was. Those people who smile politely and change the subject to something “apolitical” would rather I didn’t bring up my brown-skinned children or mention that they’re bi-racial, or talk about racial equality; in fact, they wish I had never had those brown babies at all.

These white-utopia zealots see our country’s diversity as a violation. Their rules say that whites belong here and all others belong elsewhere. To them, our shining city on a hill isn’t a beacon to others, it’s a whites-only domain that’s been scrubbed clean of dissent and variance, and only truly white people belong here.

It does look like that hill is surrounded by brown and tan and black and hijab wearers and wheelchair users. It sounds like the air is filled with cries of protest at this ignorance. It feels like I am not alone in believing in the multi-colored, multi-ethnic, multi-intelligence, multi-experience power of this incredible country.

But I still feel the sting of knowing that deep down, there are people in this country who, like my mother, cling to their uninformed opinions about the brown people knocking at our door.

It still hurts to know that their commitment to their ignorance is stronger than their compassion for humanity.

I just thought we were better than this.