But I was hit hard by the realization that I have now lived my life for nearly 20 years with the man I pined over from the time I was 16.

I have now been with him longer than I spent pining for him.

The other thing that hit me was how wrong people were about us. And we had a LOT of people telling us not to get together, and not to get married. I mean, it was a shocking number of people.

Without attribution, allow me to share with you the ways in which we were warned not to get together.

–She’s cut from the same cloth as your ex-wife, only much worse.

–He’ll abuse your son and molest your daughter.

–He’s getting divorced, so he’s not a good mate. (I got divorced too, but that was irrelevant, apparently.)

–He’s a bad influence on you because he’s not a born-again Christian.

–He doesn’t really love you, he really only loved someone else.

–You’re only doing this because he was your first love. It will never work.

–She just wants you to save her.

–He just wants someone to rescue.

If there is a theme to this blog, it’s “why do people feel they have a right to say ANYTHING?” In all seriousness, I would like an answer to that question. Especially in matters related to relationships, and in those, stopping short of calling out abuse, why on earth do people stick their noses into other people’s business? The only thing they achieve is resentment and defiance.

Don’t get me wrong: we’ve had some really hard times. It has not been an easy decade and a half. Tim and I are complex, difficult people, and after years of focusing on the kids, we’re just starting to figure out who we are as a couple. It’s been hard work. Now that our initial terror over that prospect has subsided, it is an exciting time in our marriage.

Some of the people making comments have since recanted their views, made peace with my union with Tim, and have embraced his presence in my life. Some of them haven’t. But their opinions have never once factored into my belief in Tim, nor (I suspect) Tim’s in me. 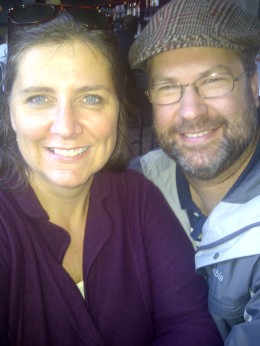 se who held dear to their opinions…well, they have assumed a distant place in my life, if they have stayed at all. I interact with them cautiously, keeping them at bay, distrustful of their understanding of my life and who I am. They couldn’t see me or Tim for who we really were, and they continue to view us through their distorted lens.

It was sometimes sad to know we started our life together without the full love and support of our families and friends, but it sure made us lean on each other more. And that moment in our lives made us commit to absolute, unequivocal support for each of our children and their chosen mates, no matter who they are. We are determined to be the loving, warm extended family we always longed for.

So there you have it, folks; all your warnings and misgivings about Tim and me together have been proven wrong over and over and over.

As Tim and I plan our first big Oregon anniversary, which might include whale watching or a visit to the hot springs or a moonlit dance on Council Crest, I am enjoying the spoils of our hard-fought victory. We made it this far, and from the looks of it, the hardest part is behind us.