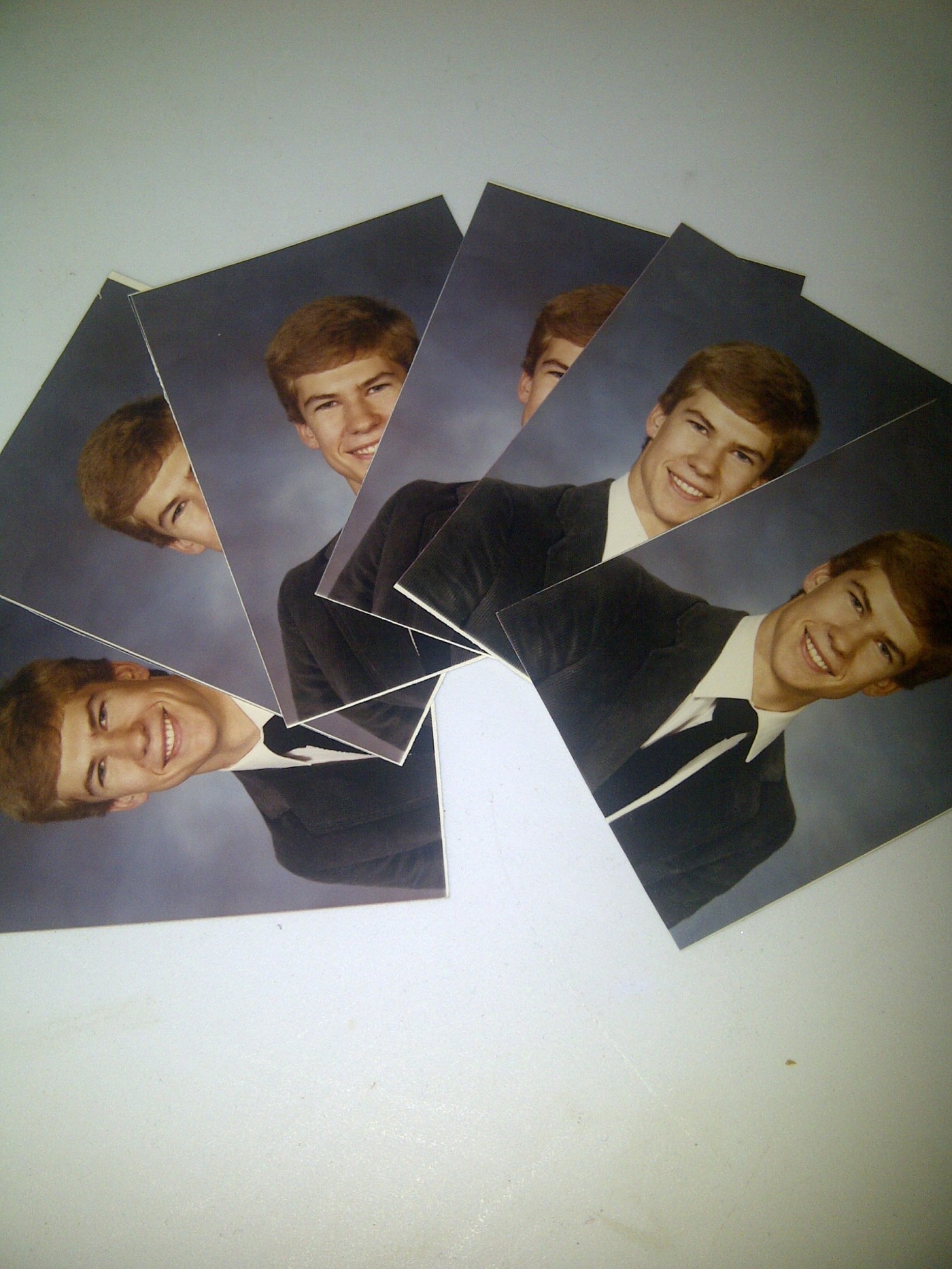 Tim likes to tell people we were high school sweethearts.

Technically, it’s true. We dated in high school. He was my first love. But for me, “sweethearts” denotes something we weren’t; a long-term couple devoted to each other, their relationship spanning several years, unmarred by ugly breakups.

Tim and I dated for 6 months our junior year. Our relationship ended badly, and left me with a broken heart and an unrealistic template for the “perfect man.” Tim lived on in my consciousness as the man against whom all others were judged, and all others failed to rise to his level of near perfection.

And that ain’t high school sweethearts, people. That’s “obsession.” Nothing cute or healthy about THAT.

Our story isn’t notable or romantic for the idiotic mistakes we made when we were 15. Tim disputes this, but it’s true for me, and this is my blog. He can write his own if he feels that strongly about it. Our relationship at the age of 15 was merely the way we know each other, the incident that brought us together. For the sake of clarity, here’s the timeline.

First day of high school, August 25, 1982, 7:20 a.m., first hour class: French, with Mme. DeVoss. Tim sat in the row next to mine, the C to my maiden-name B, and I noticed him right away. He was a complete dork. He wore velour, v-necked shirts and bell-bottom jeans, had weird poufy blond hair, and walked like a duck.

I have never liked blonds.

End of sophomore year, still French classmates, Tim asked me on a date. The boy I *really* liked wasn’t interested, so I said “what the heck” and went out with Tim. There was shopping involved, because that’s what kids in the 80s did on dates, and then somehow, even though neither of us drove, we ended up at Pottawatomie Park, walking in the rain. Sounds romantic, right? Nope. I thought he was the biggest doufus I’d ever met, and couldn’t wait for the date to end. Seriously, this guy “liked” me but wouldn’t make a single move? I’d been on a date already, with an older guy, and HE held my hand in the middle of the date. He knew what he was doing, as all older guys did. Tim, on the other hand, was a perfect (boring) gentleman, and barely even acknowledged I *had* a hand. Proved everything I suspected about him: complete weirdo.

Side note: the guy I really liked grew up into an utterly gorgeous man who is a complete asshole. Pay attention, young people; pretty men can be just as vacuous and moronic as pretty women. Attractiveness does not indicate good character.

Tim and I walked along the river up to main street. It was raining, and I remember the smell of my yellow slicker on that warm day. I had Neil Sedaka running through my head, but felt cheated that my potentially romantic walk in the rain was spoiled by the presence of a guy I thought was a nerd. Oh well, maybe someday a guy I liked would ask me out.

When Tim dropped me off (again, I have no recollection about who drove us, because parents are largely invisible to teenagers), I barely looked at him, rushed in the house and closed the door on the whole experience.

By September junior year, a miraculous transformation had taken place. Tim had turned into the most magnetic, appealing, hunk-of-a-man teenager I had ever seen. I wanted to date him so bad, I asked him out.

That’s what he says.

I don’t think there’s a snowball’s chance in hell that I would have opened my mouth to ask a boy out, but that’s the story.

Anyway, I asked him out. Or something. We went to a lot of football games together, during which I sat on the bleachers behind the marching band and watched him play tuba. After the football games, we’d go to the dance. And wow, could he dance! He danced with great abandon, and really good rhythm, and he had so much fun. I loved dancing with him.

I went to his hockey games, where I saw him skate and hit people. Quite simply, Tim skating is a thing of beauty.

Then we went to basketball games together, during which I sat once again on the bleachers behind the marching band and watched him play tuba. During the marching band version of Lionel Ritchie’s song “You Are,” he turned around and played the tuba part while looking at me the whole time.

I knew right then I was in love.

Lionel Ritchie played on a tuba will do that to a girl.

Sometime that spring, and it doesn’t matter when, Tim decided it was over. He informed me, my heart shattered into a million pieces, which then stabbed me every time I saw him, and then threatened to slice me into pieces when he took a different girl to prom our senior year.

He loved somebody else.

That’s not a high school sweetheart. That’s a heartbreak. But that’s not the story that’s important. We were 16, for Pete’s sake. Stupid things happen when you’re 16, like blue eye-shadow and breaking up with people because your peers disapprove of the person you’re dating. High school is the worst time in many people’s lives, and I don’t care WHAT Bruce Springsteen says about Glory Days. He’s wrong. My phrase for people who enjoyed high school is “peaked too soon.”

On February 5, 1999, Tim traveled 350 miles from Chicago to Carbondale to take me on a date. Our first date as adults. In that age before the ubiquity of the internet, Tim found my address, took out a sheet of paper, wrote me a letter, put the letter in an envelope, addressed it, licked a freaking stamp, and put that letter in a mailbox.

People, that’s special. Come on, you know it is.

And when he arrived in Carbondale, after I hadn’t seen him in 6 years (yeah, I counted…last time I had seen him was at a wedding of mutual friends), he was the most riveting, intensely attractive, incredible man I’ve ever seen.

And he still is.

That night, we went to a restaurant that no longer exists in Carbondale, had a real honest-to-God grown-up dinner, walked around campus in the dark, which turns out to be much more romantic than walking around St. Charles in the rain with Neil Sedaka in my head. We wandered around the campus’ newly installed Japanese garden, and I showed him the place I’d spent the last 12 years, the place I’d spent my entire adult life.

And he met my children.

And the moment he met my daughter, he asked me to teach him how to pick her up.

People, THAT is romance. THAT is devotion. Not some bullshit high school fantasy about “sweethearts.” A man who steps up and says “okay, I see you’ve got a life here, and I want to be part of it. How can we make that happen?” is worth more than all the juvenile nonsense George Michael ever warbled. Careless Whisper? You’re right, George. Guilty feet have got NO RHYTHM.

So if you must swoon over our love story, please take a moment to note the true romance, and don’t get stuck in some distorted vision of naive, immature enchantment.

Remember this moment, the one when Tim mailed that letter, then one when he decided there was something about the girl whose heart he broke that he *had* to connect with again. Remember the effort it took for him to decide to buy a train ticket and travel six hours to see someone he once dated, someone he wasn’t afraid to face even though he had broken my heart. Remember the moment he stood in my living room and let me kiss him with all the passion of a 16 year old but with the improved skills of a 30 year old. Remember us running across the street, hand in hand, as we enjoyed our accelerated adult attraction and fresh, vivid chemistry.

This is our anniversary. This is the date we became the couple we are now. We may have married on a different date, but who we are together was created that night, February 5, 1999, on a chilly night in Carbondale.

And tonight, this couple celebrates 16 years together. Pretty good, for a guy who used to wear velour shirts and the woman who never forgot him.

One thought on “Anniversary”