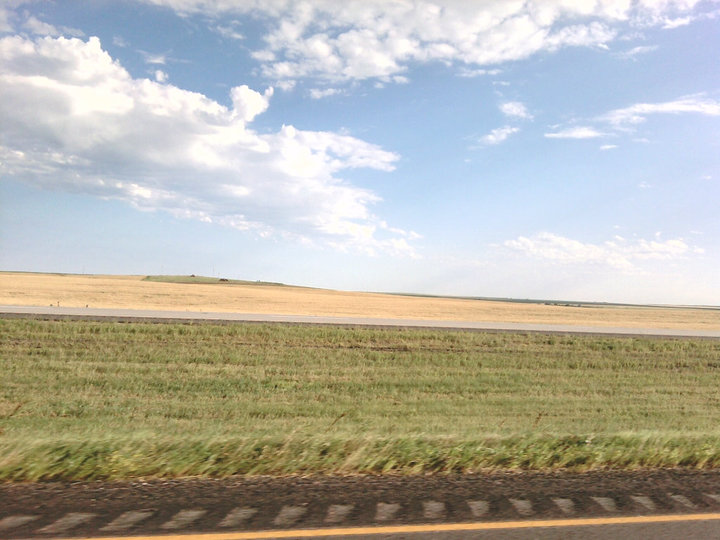 The other day, I made hotel reservations in Iowa, South Dakota, Wyoming, Montana, Wyoming again, Idaho and Oregon. That’s the path we are taking at the end of the summer. That’s the path to our new home. But it’s also a vacation and a road trip and a honeymoon.

Three years ago, my daughter and I drove almost the same route, also ending up in Portland. Along the way, I found myself wishing that Tim was there to see what I was seeing.

The breathtaking grasslands, the enlightening  mountains, the steep grades and shaggy pines, the inhibition of the wilderness.

I wanted him to see it while I was seeing it, to hear how it affected him, to experience it together.

For seven days, we’ll drive across the country together; Tim, me, Sophia and the dog. This time we’ll have a trailer.

Not a long, long trailer, just a shortie to carry Sophia’s power chair. Still, it should be interesting to drive some of those grades with a trailer.

This trip serves a practical purpose–to carry us from Chicagoland to Portland (-land?), but it’s more than that. It’s our transition out of our old life, the separation of the last year, into our new life together. It feels very much like a honeymoon in that sense, a moment in our lives when we’ll make memories together that have nothing to do with our regular life, and aren’t laden with parenting issues, as so many of our grand vacation trips have been. Years ago, we took the kids to Texas for spring break. I can’t say it was a camping trip, because we only camped out once, on the beach at Galveston Island, but we did drive. Being in the car together was a huge bonding experience for all of us, and gave us a chance to talk about things in a greater depth than we could just around the dinner table. The car trip also gave us a chance to memorize every Veggie Tales Silly Songs with Larry recording to date. Our oldest was 15 at the time, and even he loved listening to Veggie Tales on that trip.

A few years later, we took the kids to DC. This wasn’t a driving trip for everyone: one of the boys flew out and met us there, and then both boys flew back together, leaving three of us to attend a conference. But the five of us drove around DC and Virginia for a week, seeing the sights and using the amazing Metro into the city.

Both trips were amazing, but they were family trips. Our focus was getting the kids to see as much of DC as possible, to expose them to the history and grandeur of our nation.

This feels vastly different. This feels like we’ll be walking through a door to our new world, a world opened in the western expanse of the country. I’ll get to show him all of these things that I saw on my first trip, to see through his eyes those things that left such an imprint on me. We’re diverting down through the Grand Tetons this time, where we’ll get to see country that’s completely new to both of us. And this time, we’ll go IN to Yellowstone, which I didn’t do the first time because the entry fee was exorbitant (and my daughter really wasn’t that interested.) I found out later that my daughter could get us free entry into all national parks by dint of having a permanent disability. We may or may not use that this year. But we’re going in, and we’re going to look for elk and bison and mountains and mountains and mountains. And mountains. And some sky.

I know honeymoons are traditionally times for lots of sex. Or that’s what I hear, anyway, never having been on one. But for this trip, we’ll have to alter those expectations because we’ll have our 19 year old along. We’ve been married 11 years; I think I can handle changing expectations for this kind of honeymoon. The way I see honeymoons is that they’re the first opportunity to travel together, to gather memories as a married couple (as opposed to parents taking kids on an educational vacation.) So for that reason, this is truly a honeymoon for us, albeit 11 years delayed.

It’s going to be a different trip for Sophia, as she’s going through a transition of her own. At the end of August, she’ll say goodbye to her home state, to the university she loves, and seek a new place for herself in Oregon. It’s been a very difficult decision for her, and I expect this to be an emotional trip for my zipped-up child. I expect around Nebraska, it will hit her, and she’ll melt into a puddle that we’ll tenderly reconstitute over the miles.

Seeing the country fly past her will have an affect on her too, but I don’t know what that will be. She is excited to be moving to Portland, a city she loves, but the huge number of unknowns has her unsettled right now. I expect she’ll be quiet on our trip, tuned in to her iPod, with the dog’s head snuggled on her lap. She’ll need the cuddling, and on this trip, she’ll have unprecedented emotional leeway. She’ll have her parents, who will be enjoying each other and the country so much we’ll positively ooze contentment.

As I pack boxes and throw or give away items we’re not taking along, my mind wanders to August 31, and the excitement distracts me from the unpleasant tasks. I get lost in daydreams about this trip, about moving to Portland, about being with Tim again for more than a few days at a time. So come August, we’ll hook up the wagon, set the dog and the girl in the back, and head out west on our own Oregon trail. I cannot wait.