I was inspired by Meg’s piece to talk a little about what my youth was like, where my love for the outdoors comes from, and why I’m done with the city. Mine is a different story from Meg’s, because I grew up in two different worlds.

We lived in a stepping stone neighborhood in the Toronto suburb of Mississauga, though it’s difficult to call it a ‘suburb’ since it had a population of close to a quarter-million people even back then. It was essentially a smaller but distinct city, and a city it was. 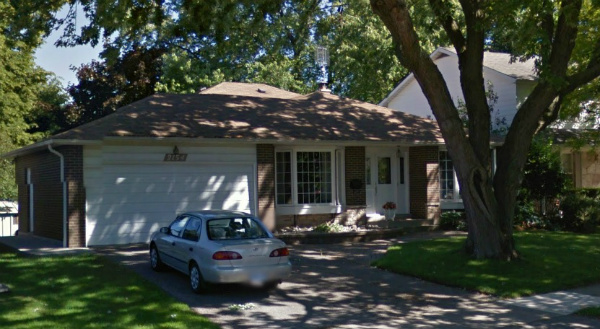 We lived on Jenner Court, two tidy rows of sturdy brick homes owned by everyone from factory workers and skilled tradesmen to dentists and chartered accountants. Narrow-ish streets bordered by groomed lawns led the way to Sheridan Park Public School, the center of the community in a number of ways. But we were barely 200 yards from the intersection of Dundas Street and Erin Mills Parkway, which was then (and remains) one of the busiest intersections in the area. The curtain between the serene and the frenetic parted when you got close enough to hear the trucks braking at 5th Line West.

For us kids, it was mostly a safe and bucolic existence. Summer evenings playing hide and seek; Saturday mornings playing street hockey; riding our bikes or pushing our skateboards; tossing dirt bombs or crab apples; or climbing the maple tree in our front yard to the point where we were afraid to climb any higher. But apart from the green grass and neatly tended gardens, it was a world formed of concrete, bricks, and metal garage doors, gilded with storm windows and aluminum siding.

But for my two siblings and me, that changed on weekends. My grandparents had bought property north of the city back when that property was cheap. They held on to it as a vacation home, and spent much of their summers hosting family for visits. This was the as-often-as-we-could ritual: pack the car on Friday afternoon, dash north to The Cottage, stay until Sunday, then drive home. And the cottage was our other world.

Tucked in the forest beside a decent sized lake about two hours north of Toronto, the cottage was where we spent many, many weekends — and weeks at a stretch when we could — doing anything and everything you could imagine kids could do there. Swimming, fishing, driving the boats, paddling the canoes, catching frogs and toads, the list is endless. The only TV on the premises during that era was a small black-and-white (yes, children: there was a day when television wasn’t in color!) and only got about two channels when the weather was good. But there were plenty of books, board games, playing cards, cribbage, and crokinole. Look it up.

In short, this was the exact opposite of our world in the city. We raced out the door right after breakfast, and often had to be found in order to notify us of meals. Gravel roads, dirt paths, and branches snapping beneath our feet took the place of the puddles and pavement of Erindale. Step too close to the lake and you’d slip on the moss, giving yourself a soaker and occasionally a skinned knee or abraded ankle. Hot dogs and marshmallows were done over the fire down by the lake, as we watched the bats skim the glassy surface to fetch their evening meal of water striders.

After we moved to the U.S. those trips were reduced to one or two weeks per year due to the distance, and became even less frequent during my college years. Married life restored our once-a-year trips. After a certain point it was apparent that the cottage was the only place where I was truly relaxed.

One year, Meg and I went up by ourselves in mid-October, the leaves mostly fallen and the summer crowd long since departed. The cold air brought by the steady breeze, warning of winter’s approach; the serene and dignified forest, calm and at rest after completing its job for the year; and the dark stillness of the lake, absorbing light and deadening sound from all sources; they put me into a state of such inner peace that Meg hardly recognized me.

This was the man she was hoping would one day emerge from the bristling ball of stress that she knew in Chicago, and which she hopes will one day return.

That is one of the big reasons that the move away from the nation’s 3rd largest city is likely to be a benefit to me, and to my relationship with my sweet bride. I loved being in the woods as a kid, and I love the solitude and bustling silence of the forest as an adult. In Chicago, the largest hunk of almost-genuine forest I have found to date is Busse Woods in Elk Grove Village. But even within the confines of that scenic retreat, it is merely a facade: you are barely three miles away from the second biggest mall in the country, the intersection of two massive interstate highways, and the busiest airport in the United States. For all the trouble they have gone through to preserve that space, it resembles a forest in the same way that a Big Mac resembles a 7-course meal.

In Portland, the difference is so stark as to be disorienting. This is very obviously a city that was placed into a natural area, as opposed to one that was built up from the dust after the trees and grass were unceremoniously scraped away. The sprawl of the city is constrained by geography in a substantial way, as much of the forest is on hills so steep that trying to get construction equipment to sit still on them would be difficult to achieve. And the residents of the area are extremely protective of their natural surroundings, legislating limits to the expansion of commercial development.

My apartment sits on a hillside just south of a huge park that stretches for miles to the northwest, a blanket of untouched forest enshrouding the southern tip of the Tualatin Mountain range. On my way to work I see trees that reach farther skyward than anything at the cottage, and I travel down the side of a mountain taller than anything in the entire state of Illinois. And besides that, I am just a two-hour drive from both the Cascade Mountains and the Pacific ocean.

The cottage will always be as magical and wondrous to me as it was when I was young, mainly due to the memories that I have attached to that place, dating back over 40 years. But just outside my front door there are tens of thousands of square miles of magic and wonder, fertile ground for new memories that will last another 40 years and beyond. Very soon, Meg and I will begin to explore, and enjoy, and make those memories our own. And in the process, we hope to find the people we always hoped we could be.