I just finished doing yoga with you. There you were, resplendent in fuschia, exactly as you looked all those years ago in your workout videos. But now, you’re older, almost my parents’ age, and wearing that age beautifully. 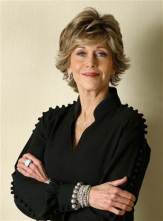 I have only recently found a way to appreciate you. Some of your movies have a place in my life–The Electric Horseman, Agnes of God and, the one that hits me the hardest, On Golden Pond–but I grew up in a household that didn’t like you. My parents put you in the Dirty Liberals category, and all of my perceptions about you were colored with their lens.

The Vietnam thing….well, I’m only vaguely familiar with that. It was bunched together with Dirty Liberals, just more proof that you were not to be trusted.

My mother LOVED Lily Tomlin (how did SHE get excused for being a dirty liberal? I have no idea), and cheered every occasion a man got his comeuppance, so 9 to 5 was a huge hit in our house. Other movies we watched in spite of you, not because of you. My mother couldn’t resist Robert Redford. Don’t tell him, but I’ve never been a fan; he knows he’s good looking, and all of his characters give off that “everybody wants me” vibe. And blond men leave me cold. But if he was in it, my parents watched it, so you rode his coattails into my consciousness.

On Golden Pond is a personally affecting movie for me; first, my husband’s family has a cottage on a lake that is very like the cottage in the movie, and the scene where they get out of the car at the cottage and hear the loon is evocative of my experience going to that cottage. Plus, the movie is all about the problems of not living up to one’s parents’ expectations, and the difficulties of relationships with demanding, critical parents, something pretty close to home for me.

I have another, more vexing problem with you; you look like my mother in law.* She’s tall and lean like you, same face shape. But she’s been awful to me, a problem that reached its peak a couple of years ago, and when I see your face on screen I used to have anxiety attacks.

That movie Monster in Law actually brought me to tears because I saw you as her. She didn’t go quite so far as your character, and my husband isn’t a mama’s boy, but the unnecessary cruelty and targeting of the daughter in law triggered some painful memories in me. Why did I watch it? Oh yeah…Jennifer Lopez. Love her acting.

It’s small wonder, then, that I have resisted your work. But there have been little appearances that have pushed me into acceptance, starting with your stint on Newsroom (oh, I wish that had lasted!), where the character’s strength and intelligence won me over. Yes, she was sometimes ruthless, but ultimately, she did the right–if difficult–thing.

And then, thanks to Lily Tomlin, I found Grace and Frankie. I will watch ANYTHING with Tomlin, or Sam Waterston (I’ll take him over Redford any day, and twice on Sundays), or Martin Sheen.

Oh, and here’s a lovely contradiction: Sheen is SO LIBERAL, and yet my parents loved him. Know why? He named himself after Bishop Fulton Sheen, and has been “married to the same woman for 235 years” or something. So he gets a pass. I’m sorry you weren’t Catholic enough for my parents. Or married long enough. I’m pretty sure you can handle my parents’ disappointment.

Watching Grace and Frankie, I have found a way to see you as something other than the idea of you that I learned from my parents, and someone completely different from my mother in law.

And thank god, because I could not handle the reminders of her coming into my home.

Oh, and I’ve also watched a lot of interviews you’ve given about the show. The way Tomlin talks about you, the way you interact with her, the kindness and curiosity about the world that you show have won me over. The interviews have been more influential on my opinion of *you* (as opposed to your character on the show) than the show has been.

From what I can tell, you were looking for a way to work with Tomlin again (a huge point in your favor) and were enthusiastic about bringing to the screen stories about women who aren’t Gorgeous Young Professionals or Harried Young Mothers (another huge point in your favor). And your character learns (SPOILER!) to love “alternate” people like Grace, and takes the enormous stick out of her ass.

In Grace and Frankie, you and Tomlin have shown how large life can be for women beyond the all-consuming family-raising work. These two women have been thrust out of their roles as devoted wife and grandmother by their husband’s choices, and now get to explore what life has to offer them as individuals. And it’s a LOT.

As a woman whose nest has been recently emptied of children, whose husband works in another time zone, whose world is suddenly, starkly, delightfully, frighteningly empty of anything but my own thoughts and hopes and plans, your show–your characters–have been a beacon for me.

Yes, it’s all a fiction. Yes, your characters have no financial concerns to speak of. Someday, I’d love to see a show that highlights people who live at the poverty line, and are trying to navigate life’s uncertain waters without unlimited resources. But hey–this is the first show focusing on upper-middle-aged women (wait, does Golden Girls count?) and a gay couple finding themselves later in life (that’s not a spoiler, is it? I mean, it’s the premise of the show!), so…small steps, I guess.

But I wanted you to know that in spite of my history of viewing you with revulsion, despite what I was told to think about you, despite what I did think about you (I’m pretty sure Agnes of God horrified me, as a still-Catholic young woman who believed in the Church’s doctrine about childbearing), and despite your unfortunate resemblance to my loathsome mother in law, I think you’re pretty great.

Over the last five years or so, I’ve started figuring out who I am: environmentalist, pro-choice, LGBTQ ally, fervently supportive of Black Lives Matter, vocal social justice warrior, feminist, and advocate for economic equality. I have become the thing my parents despised the most; I am a Dirty Liberal.

And I do yoga. I started about a year ago at a local studio, and this morning, I started a program on my TV, with you, in your fuschia exercise clothes, gently guiding me through familiar poses, encouraging me to take care of myself. This is new for me, this self-care thing, so I’m awkwardly reaching for footholds as I find my way. With this, as with Grace and Frankie, you are helping me learn how to handle this next stage in my life: a Woman of a Certain Age.

*yes, I know, saying my MIL looks like Jane Fonda is an enormous compliment to my MIL, but I never said she was ugly; she did produce some rather beautiful children. Her daughter is just stunning, and my husband *still* makes my knees buckle. No, my MIL is not ugly, she’s just cruel.

One thought on “Dear Jane Fonda”