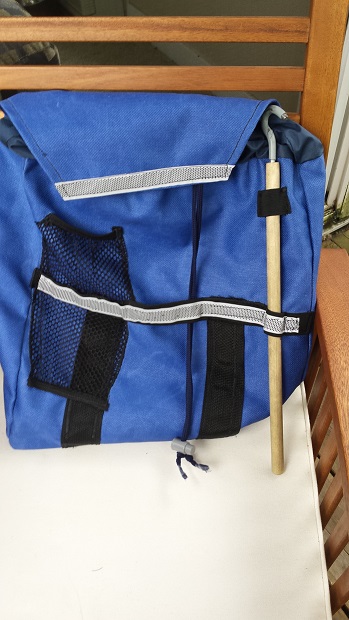 Over the years, we’ve had to be intellectually and physically creative in making accommodations for Sophia. From shortened sleeves and easily accessed “fracture” clothes to short desks for doing homework, we’ve adapted her physical world when it was appropriate, which is not to say we did it every time it was needed, as we’re aware of the importance of her learning to deal with an imperfect world. Still, we’re old hands at making tools for Sophia to use to navigate her world.

Some of those pieces of equipment were successful, some were not. This weekend, however, I completed a project I consider a great victory; I made a bookbag.

I write that and cringe; a bookbag isn’t such a huge thing, and yet I poured hours into this project. I know there are creative people who can and have made much more complex items, but I’m going to take a victory lap anyway, because this is the most elaborate success I’ve had.

Since she was in middle school, we’ve been looking for the right bag for her. The challenges: she has very short arms that aren’t super strong, and the bag has to hang on either the back of her manual chair or on the side of her power chair equally well without interfering with the function of the chair while still accommodating all of her books and a laptop. It can’t be too deep, and needs to be easily accessed from the top. Plus, now that we live in Oregon, it needs to be waterproof.

Regular backpacks are out. They drag on her wheels and don’t stay high enough on the chair for her to access in the manual chair, and there is no good place to hang it on the power chair. A messenger bag is altogether useless, as its strap cannot be fixed either on the handles or the hooks of either manual or power chair, and the flap that traditionally covers the opening of the messenger bag makes access an annoyance.

For a while, she used a panier designed for bicycles, but it proved ultimately to be too wide for the chair, and has no covering to prevent the contents from getting wet. And it would never work on her manual chair, as it has no hooks or straps of any kind.

What I’ve made is a hybrid bag;

it’s similar to a backpack, but has no straps, only hooks at the top that allow her to clip it to the back or side of her chair with carabiners.

It’s only four inches wide, so it won’t add much to the width of her power chair. And best of all, thanks to the delightful discovery of Rose City Textiles, a fabric producer specializing in active and outerwear fabrics, every bit of it is waterproof. Don’t look too closely at the stitching; it’s not perfect. But it will hold, I guarantee you. Like all of our projects, it’s ridiculously over-engineered.

Sophia dictated the terms of this bag, from the width to the depth to the whack-a-mole and drink holders on the outside (the stick you see is a reacher for light switches. We call it a whack-a-mole. Tim made it for her.) The only part that I insisted on was the reflective tape. And seriously, Rose City is a treasure trove of bits and bobs and ingenious materials for making all kinds of things. From their dollar bin, I’ve got material to make myself a lovely Portland-y bag, complete with funky patterned material for the inside. No birds, however.

The hardest part of this bag was the cinched opening on the rectangular shaped bag. This is where I had to employ Mr. Mathbrain Currell.

A word, if I may, about math. I am math deficient. My mother blamed it on my Catholic school education, but there’s no telling where it came from. People have tried to shame me and mock me for this deficiency, but I have come to realize that math hits me the same way Wonderland hit Alice; the strange rules, there’s nobody you can trust (every math teacher I had was a Cheshire Cat, smugly gleaming at us from the dusty corner of the room), the things you have to do to function within the fantastical landscape (drinking potion to become the right size? WHAT?), Mad Hatter psychotics spouting gibberish in the form of quadratic equations, and the utter terror of getting the answer wrong, “Off with her head!” It finally hit me; there’s nothing wrong with ME. It’s you. Everyone who does math well belongs in Wonderland with the rest of the weirdos.

Back to the bag. Annette at Rose City helped me visualize the opening, led me to the right material, and Tim used Math Magic to execute the idea. Thus we have a perfectly waterproof, easily opened-from-the-top bag for my daughter to take to college.

Tomorrow. She leaves tomorrow. I’m sure this isn’t the last time we’ll collaborate on a tool to improve her function, but this is the one about which I’m the most proud. No, I won’t put it on Etsy. No, I won’t try to sell the design to other people. That’s not how I want to spend my life. But it gives me a thrill to know I made something she will be able to use.