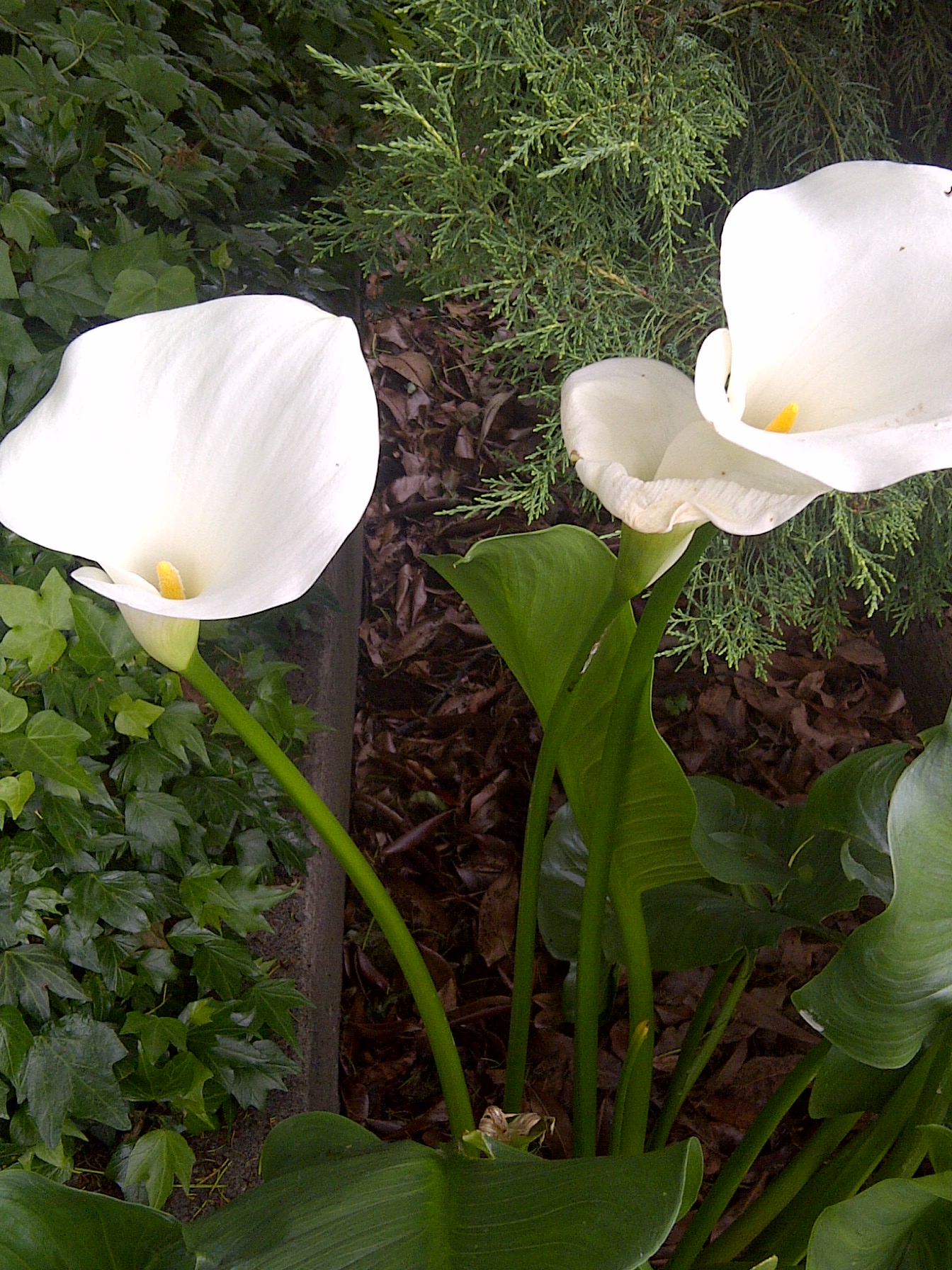 Every day since I moved here, I have had reason to say “I love this place.” The phrase is usually accompanied by a stunned shake of the head, or preceded by a gasp of joy, or, most often, murmured while I’m taking a picture of yet another gorgeous blossom that happens to be growing on the side of the road.

There is ample reason beyond the scenery that I have come to love this place.

Weather — People warned me I would hate the weather out here, but quite the reverse is true. The temperate conditions here make it possible for me to enjoy the area. In the midwest, we were subjected to severe extremes; cold so deep it hurt your face, heat so oppressive it was difficult to breathe. There were about four weeks total “shoulder seasons” between those two extreme seasons. In those four weeks, everybody was happy. In Portland, those four weeks are what it’s like 75% of the time. Even when it rains, the temperature is mild. Very few weather-related conditions are painful to endure.

It’s like this; in the Midwest, we’d get storm warnings, legitimate alerts about systems with the potential to throw a cow into our bay window, accompanied by either snow or hail. In Portland, weather reports inform us about whether to bring an extra layer to wear under the ever-present rain jacket. The weather man does not trigger a fear response. I like that.

People — I’ve touched on this before, but people here actually acknowledge your existence. If you make eye contact with a stranger in Portland, you’re likely to fall into a friendly conversation. For instance, when Tim and I were out for ice cream the other night, a young dad passed by the ice cream parlor with his daughter on his shoulders. Tim and I watched and laughed as this ice-cream-shop-poster child wheedled her way into the shop. The dad saw us chuckling and said — TO US, right to our faces! — “she’s so hard to resist sometimes…” Tim laughed, practicing his wise grandfather face, and said “why would you resist a kid like that? that’s what ice cream was made for!”

On the way out of the shop, the dad clapped Tim on the shoulder and wished us a good night.

Such an exchange was so rare in the Midwest it might actually be classified extinct. Should we have been caught laughing — even gently — at a suburban father, we would have been subjected to a stony glare from the dad at the very least, and, more likely, a group shunning from the whole ice cream shop. How DARE we imply that we know him! Such impertinence to make eye contact with strangers! In Portland, such conversations are regular — delightful — events.

Community — Individuals are one thing, but the community is quite another. From what magic this comes, I don’t know, but this place has a collective attitude that encourages working toward the greater good.

For instance, pedestrians. According to state law, every intersection is a crosswalk, even if it’s not marked with paint. Practically speaking, this means that if a person on the sidewalk looks like she might be thinking of crossing the street, the cars in the intersection will stop until the person crosses the road or the thought passes. As a driver, this is startling; you’re driving along, and the light is green, but the person in front of you is stopped dead, and you don’t know why. Suddenly, a hipster in suspenders and a beanie strolls into view, entranced by his phone. But nobody is honking their horns! Nobody is screeching around the stopped vehicle to get around the corner! Everyone just…waits.

As a pedestrian, it’s even more weird. You stand on the corner, waiting for the crosswalk sign to tell you it’s safe to go. Long before that light beams at you, the Subaru (and it’s always a Subaru) in the lane stops, its driver smiling beneficently, gently gesturing to you. “No, please,” his eyes say from behind the dark-rimmed glasses. “It’s your turn. I inisist.”

After a couple of days of this, I started thinking that the male drivers of Portland were so stunned by my beauty that they were moved to chivalry. After a couple of weeks, I realized that drivers were stopping for everyone; men, women, riders on camelback, blanket-bundled street people, troupes of school children, cocker-spaniel-walking octogenarians. And that’s even better than being allowed to live because of beauty; every driver values every pedestrian, even if they do so because they fear the penalty if they don’t.

The funny thing about laws like this is that, when people follow them, it encourages more people to follow them, and that makes our society better. The more people stop for pedestrians, the more people will feel safe walking or taking mass transit instead of driving. Pedestrian traffic encourages local commerce; the local pharmacy, the local coffeeshop; open-air cafes and restaurants; libraries and second-hand bookstores. Small-scale endeavors can flourish in this kind of community.

In Chicago — well, even in Chicagoland, the suburban part, pedestrians were tolerated, but not encouraged. The right-of-way clearly belonged to the cars, although in theory, the pedestrian has the right of way. But seriously, I never felt confident cars would stop even when I was in the middle of the crosswalk halfway across the street. It terrified me to know my daughter wasn’t safe in her wheelchair crossing the street in our little town. In Portland? I feel like she’s Pope-Mobile safe.

Portland is also famously bike-friendly. Bike lanes command a healthy portion of every street, bike racks are installed and utilized on every block, whole bridges are devoted to bike and pedestrian traffic to the exclusion of cars. The more safe you make it for bike riders, the more bike riders you will have. The more bike riders you have, the fewer cars you have. Fewer cars means less crowded and safer streets, less pollution, faster commutes, fewer parking problems, less stress on the road surface, less cost sunk into road upkeep… This benefits *everyone.” Portland understands this and actively applies this logic in its planning. When was the last time you saw a city do THAT?

Consider also the city’s attitude toward recreation. At Audubon training, they said one of the goals of the city planners was to make it so that no one in the city was ever more than 15 minutes away from a park. The city has decided that it would be to the benefit of all citizens to have access to nature, to space and air, trees, swings, or water. Some of these parks are massive, like Mt. Tabor, some are just a little corner, but you are able to leave your home or workplace and be sitting on the grass in a few minutes. If you ride a bike, you can be there even faster.

Libraries — I have a passionate love affair going on with the libraries here. My #1 love is the downtown branch of the Multnomah County library, a 100 year old marble edifice devoted to some of the most avid readers in the country. Apparently, we average 38 books checked out per year here in Multnomah County; the national average? 8 books. Per year. PER YEAR.

Seriously, people, did you know Game of Thrones was a book first?

Because of where I live, I also get to use the Washington County Library in Beaverton. It’s easier to get to, but it’s constantly crowded. On a Tuesday morning at 9 a.m., there is regularly a crowd of 20-30 people waiting for the doors to open. Every day of the week.

Several neighborhoods have set up these adorable boxes where you can pick up a book of philosophy or the latest zombie novel in exchange for one of your book discards. It’s another sign of the sense of community that imbues Portland. There’s no feeling of Us against Them here, it’s just all Us, even though Us is a whole bunch of kooky, mismatched, vagabond individuals.

Food Carts — You know that guy who makes the best meatballs ever? And he brings them to every block party or office gathering? And you tell him “hey, you should sell these!”? Well, in Portland, that guy has a food cart, and he sells out in 30 minutes every day at noon.

The variety of food available at relatively cheap prices in this city is astounding. I’ve had Indian, Mexican, grilled PBJ, crepes, barbeque, Lebanese, Chinese, and a local concoction with no particular national affiliation but with the most mouthwatering mystery sauce I’ve ever had. There’s even a cart that purports to serve Chicago-style deep-dish pizza, but I’m so skeptical I can’t bring myself to sample it.

Aside from the food cart contingent, food in Portland is so beautifully local it makes my little heart sing. And I’m not talking “Portlandia” local, where you have to meet the chickens before you’ll eat the meal, I mean “They Get Their Greens From Joe Down The Street Thereby Supporting Joe Who Is A Nice Guy” local.

This is part of the community ethic that dominates this town. To me, it’s not annoyingly, nose-in-the-air local-focused, it’s “hey, we’re all in this together, so let’s support and encourage each other in every way we can” local-focused.

Fun — Since I moved here, I’ve been to four jazz performances, an opera performance, a Mardi Gras parade, a pride parade, a rose festival, a Japanese garden, a street festival, swing dancing (several times), an Irish dance performance, and an Internet Cat Video Festival. I haven’t gone to a single movie in the theater. Hell, I don’t even know where the local movie theater IS. I’ve also hiked in Washington Park, Mt. Tabor park, Oaks Bottom Wildlife Refuge, and the Sandy River. This weekend, I’m going to Ramona Falls. MY FIRST WATERFALL. About 2/3 of that list was free. And most of it was local, community-based activities designed to bring people together.

No matter what time of year it is, there is something amazing to do. All the freaking time. It’s a river of stuff to do, and I can either dip my toe in or jump in up to my neck. I’ll never do all of it, but every chance I get, I’ll enjoy the ride.

I know Portland didn’t do all of this just for me, but I feel so welcome at every event, greeted with such ease and familiarity, it feels like a banquet that has been laid for my enjoyment. And I’m diving in with both hands. The community ethic encourages me to dig deeper, put down some roots, a foreign concept for me, but a welcome one. I’m developing ties, making connections. I’m not pushing it too hard, but I’ll see what develops.

All of this is possible because Portland is the astonishing, multi-faceted, exciting society that it is. I am head over heels for Portland.

One thought on “Thank you, Portland”