Have you met my husband? He’s the tall one with Max Headroom hair and the quiet public demeanor, always Canadian-polite, gentle with animals. If you have had any kind of discussion with him, you know he’s a skeptic. Almost a cynic. On most subjects.

I could cite examples, but I (cynically) expect some readers would easily dismiss them as applying universally, so you’re going to have to trust me on this one. I’ve known Tim since he was 13, we’ve been together 20 years, he’s a skeptic.

He sure as hell ain’t the guy who will “try anything”, or who does stuff just for fun, or who experiments with crystals and essential oils. He took a six-week meditation class, complaining the whole way that he “didn’t think this would do ANYTHING, but I guess I’ll try…” (it did help) He thinks yoga is a joke perpetrated by limber people to make the stiff-jointed look bad. And yes, he thinks it’s personal.

So when the doctor who diagnosed him with Aspberger’s recommended looking into dietary adjustments for helping manage some of the symptoms, he literally dismissed her out of hand. Sitting in her office, I watched his face go from curious (oh, there might be a treatment for this?) to “ppppppppppppffffffffffttttttttttttttttt” in a nanosecond. Diet? Why would he give up his favorite foods on the off chance something MIGHT change?

It is because of this response, dear reader, that I hardly recommend that Tim try things. When a MEDICAL DOCTOR recommends something and he scoffs, I know I don’t have a chance.

When Tim met Dr. Dan–who isn’t a doctor, but we call “Dr.” to differentiate this Dan from his brother Dan, who is also not a doctor. But this one’s closer to a doctor, so Dr. Dan it is–everything changed. After the first meeting, Tim was trying techniques recommended by Dr. Dan for handling his responsiveness. First meeting.

After the second meeting, Tim was–seriously, brace yourselves–considering a gluten-free diet. Some Asperger’s patients metabolize gluten in a different way. Once the body adjusts past the phase of stomach problems and minor physical health issues, gluten is metabolized into opioids. The constant stream of gluten acts as a constant stream of naturally generated drugs.

After the third meeting, Tim decided he didn’t want to be thus under the influence, has now gone gluten AND DAIRY free.

Again, I will ask–have you met my husband?

He laughs at vegans.

When he lived in New York state, he subsisted on pasta and toast. Not even whole-wheat toast, just plain ol’ white bread toast. Occasionally, he’d score some kind of greens to go with his gluten, but mostly it was just gluten. And cheese. Dairy on top of gluten is one of his favorite things. See also: Chicago pizza. 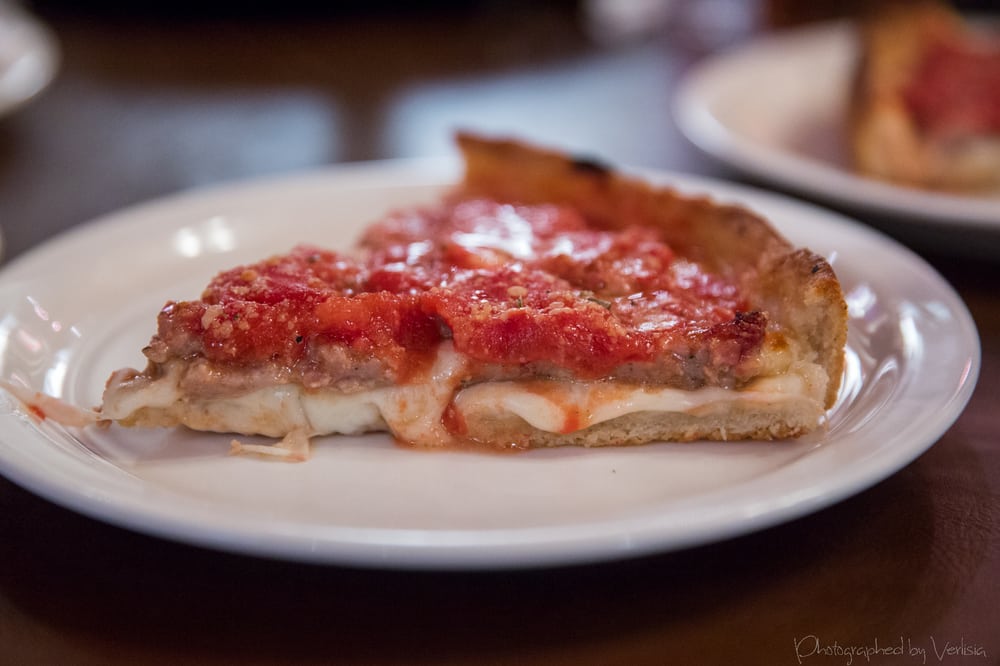 Lou Malnati’s, a Chicago specialty. If this doesn’t appeal to you, I don’t know what to tell you.

As of today, Tim has gone more than a week without gluten or dairy. To his surprise, many of our favorite recipes are already gluten-free, and dairy-free, when we skip the queso on black beans and cilantro lime rice, or sour cream with mujaddara. His wife (that’s me!) has been moving this direction for years, not purposely anti-gluten, just wanting healthier choices. This adjustment hasn’t been too bad, all things considered.

After four days off the stuff, we had dinner at a friend’s house over the weekend and didn’t mention the gluten/dairy factor. Tim wanted to just ride it out, not be That Guy. Dr. Dan had mentioned that Tim might start feeling better in a couple of days post-gluten, but aside from a more peaceful demeanor at home, Tim didn’t notice anything specific.

Not until after our spaghetti dinner with garlic bread.

About 30 minutes after dinner, he started getting the shakes, like an adrenaline rush. His stomach started “flipping out”, and by the time we got home, he spent some quality time in the bathroom. And that night, he had trouble sleeping.

The next morning, he was a reactionary mess. Once again, little things–dropping the coffee scoop–blew into a massive explosion. He grumped around the house for hours, knowing full well where his symptoms originated, but unable to stop them from taking shape in the physical world.

He felt so unpleasant in his gut and in his feelings, he isn’t interested in having gluten again any time soon. He is skeptical no more about the effects of gluten on his system. And this is a man who previously gave up smoking completely without assistance, no patch, no hypnosis, just cold turkey. Same thing with alcohol many years ago. He just quits, no big deal. He really does have a concrete emotional and intellectual constitution.

I’m proud of the work he is putting in on himself. I feel more free to tend to my needs, to pursue what’s important to me, when he is the one in charge of himself. My
well-developed co-dependence has maintained our dynamic a certain way for years–to avoid Tim being upset, Meg is in charge of the long list of things that might make him explode–but that’s starting to change.

Gluten-and-dairy-free is easy in Portland. He has choices on every street corner, in every coffee shop and grocery store. He will not want for delicious food–he’s already discovered Bob’s Red Mill GF oatmeal cookies.

I’m joining him on the gluten diet. I mean, why not. It’s just easier for our grocery budget and for cooking. Sophia can–and does–make her own food. I get to be creative in the kitchen again, flexing a muscle I’d allowed to atrophy when the kids left the nest. I’m not giving up dairy, however. My non-fat Greek yogurt breakfasts and pears with Gouda are not going anywhere.

My skeptical man has made progress down the road of taking care of himself. I see light. This tunnel has windows and fresh air. Our dynamic is a’changin’.