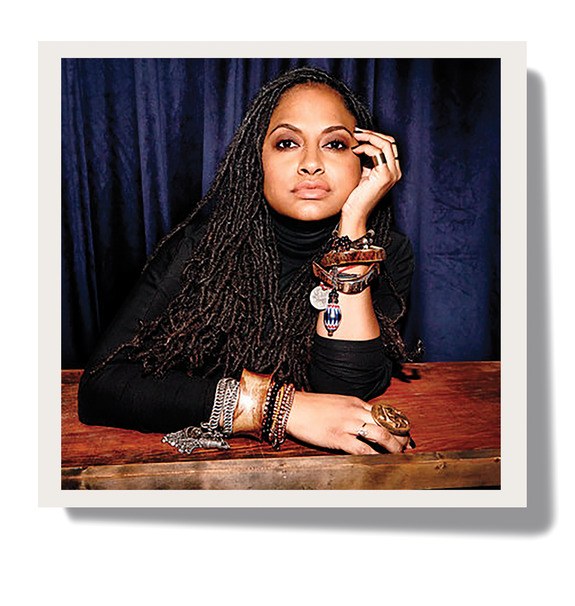 I’m writing thank you for bringing to life one Meg Murry, a person so alive for me I hesitate to call her a “character.” Ever since I learned you were making a movie based on A Wrinkle in Time, by Madeleine L’Engle, I’ve watched with eager anticipation every step along the way, each one amplifying my thrill at the approach of the book that meant so much to me as a child.

It’s important that you know my name is Meg, and that you know that I was like Meg; an awkward, out-of-step-with-her-peers child. That I had brown hair, like her. That I didn’t do so well in the friend department. That I was fiercely protective of my brother, who got bullied constantly. That I lived through Meg and her adventures battling the darkness.

The world made sense for me when I was reading L’Engle’s books. She gave me clear lines where so much of life is blurry, where having feelings sometimes seems like you’re seeing everything through a veil. But L’Engle put everything into focus through her characters. Finding Meg in those books led to finding Mr. Jenkins, the horrible principal who learns and grows through the course of the book, showing me that even adults can change and evolve. Finding Meg led to the magical Proginoskes, the “dragons” in “A Wind in the Door,” and the idea that there will be entities in my life whose presence, although sometimes terrifying, is meant to teach me something.

Finding Meg led me to all of L’Engle’s other books, which I read voraciously, as if it were the only nutrition my brain could absorb; all the Murry family stories, then the O’Keefe family, and the Austin family, and Katherine Forrester Vigneras. The Small Rain and A Severed Wasp are books I frequently revisit even today because of L’Engle’s powerful writing about music, about playing the piano, a thread through her books that holds me in thrall. I was a serious piano student, and L’Engle wrote about playing piano as if she were inside my head; the hours in the practice room, the meditative state of working through all the scales in the circle of fifths, the ability to express with your hands the feelings for which you haven’t yet found words.

Even more than feeling connected to a character, I realized I felt connected to the writer. It was this connection that led me to becoming a writer; the ability to articulate something deep in the human experience and reach out to other people who feel the same way.

I’m clinging to L’Engle more closely than ever these days. For the last year, I’ve been angry, discouraged, disappointed in people I once held in high regard. Since the election, I’ve learned things about my country and my friends that I didn’t know were true, things I resisted admitting. To find out people I love and respected don’t believe that our society is unequal, that our country was built on a fundamental injustice on the backs of people of color, was devastating. Their failure of compassion has dismantled my confidence in my fellow man.

L’Engle’s writing–even her books for children–speaks directly to my sorrow. Her clarity without bombast, her joy in diversity and inclusion, her embrace of community as a means of defeating evil, her example of forgiveness and mutual respect give me hope.

And in a similar way, Ms. DuVernay, so do you. When you were announced as the director of this movie, I was excited to know a woman would be in charge, but I knew little about you. So I read about you, and I watched. Selma is a beautiful, powerful movie. 13th changed the way I think about the criminal justice system. Interviews with you show a gracious, gentle, intelligent woman whose insight and curiosity drive you to reveal truth.

But it was seeing “Queen Sugar,” and hearing you talk about the project, that made me realize that you speak the same language as L’Engle. You’re cut from the same cloth. Your movies and shows lift up ordinary people who find themselves in extraordinary circumstances, and demonstrate what happens when those people rise to meet those circumstances with determination. Just like Meg. Only you did it with characters who didn’t look like me, so you opened a world of understanding in my once-narrow field of vision.

You went one step farther; you speak of opening opportunities for other women to direct episodes of “Queen Sugar,” women who were passed over for other chances. But you recognized the need for reaching a hand back to help the next ones coming along, and now there are two whole seasons of this gorgeous show that were directed all by women directors. You made a decision not just to better yourself, but to help others, to broaden the field of experienced women in a male-dominated field, to make it possible for real change to happen, even if it’s only one TV show at a time.

Watching your work gives me hope. Hearing you speak with such joy and purpose about your work and the people you work with energizes me for my own work. You’re a model of professional determination and cheer, an example of a creative woman in hot pursuit of her goals; now that I see how it’s done, I can try doing it myself.

Where L’Engle showed me someone who seemed just like me, you’ve shown me the kind of woman I want to be; someone who is dogged in her professional pursuits, and reaches a hand out to show other women the way forward.

There’s a line in the trailer  where Mrs. Which entreats Meg to “be a warrior.” Meg is fighting the encroaching darkness, and it feels every day like we’re being consumed in darkness too. What you and L’Engle do for me, however, is help me to see the light. Instead of focusing on the putrescence in our decaying moral world, you and L’Engle are dual lights guiding the way back to mutual respect, dignity and understanding. As the very visible face of this massive project, you ARE a warrior, and many of us have never seen before how exactly that’s done.

There are warriors who go directly to the battle, weapon drawn, ready to eviscerate the enemy. But there’s another kind, the kind that works diligently to wash their immediate circle in light and warmth, inviting people who’ve been shoved to the side to join them, making space for everyone at the table. It’s an insistence on pushing the circle ever wider, to include more, to encourage more people to create their own expanding circle of light. By persisting in the work of augmenting the good, welcoming in voices other than your own, you are creating the powerful light that overwhelms the dark. It’s work that repeats upon itself, taking root in the lives of everyone you touch.

Your intellect and drive and perseverance are a beacon for me. The way you work, the choices you make, the intention with which you put work into the world represent the light that will beat back this darkness. For what you’ve done so far, for bringing Meg into this light, and for illuminating so much more than just a movie screen, I wanted to thank you.

From the bottom of my Meg heart.

One thought on “Dear Ava DuVernay”