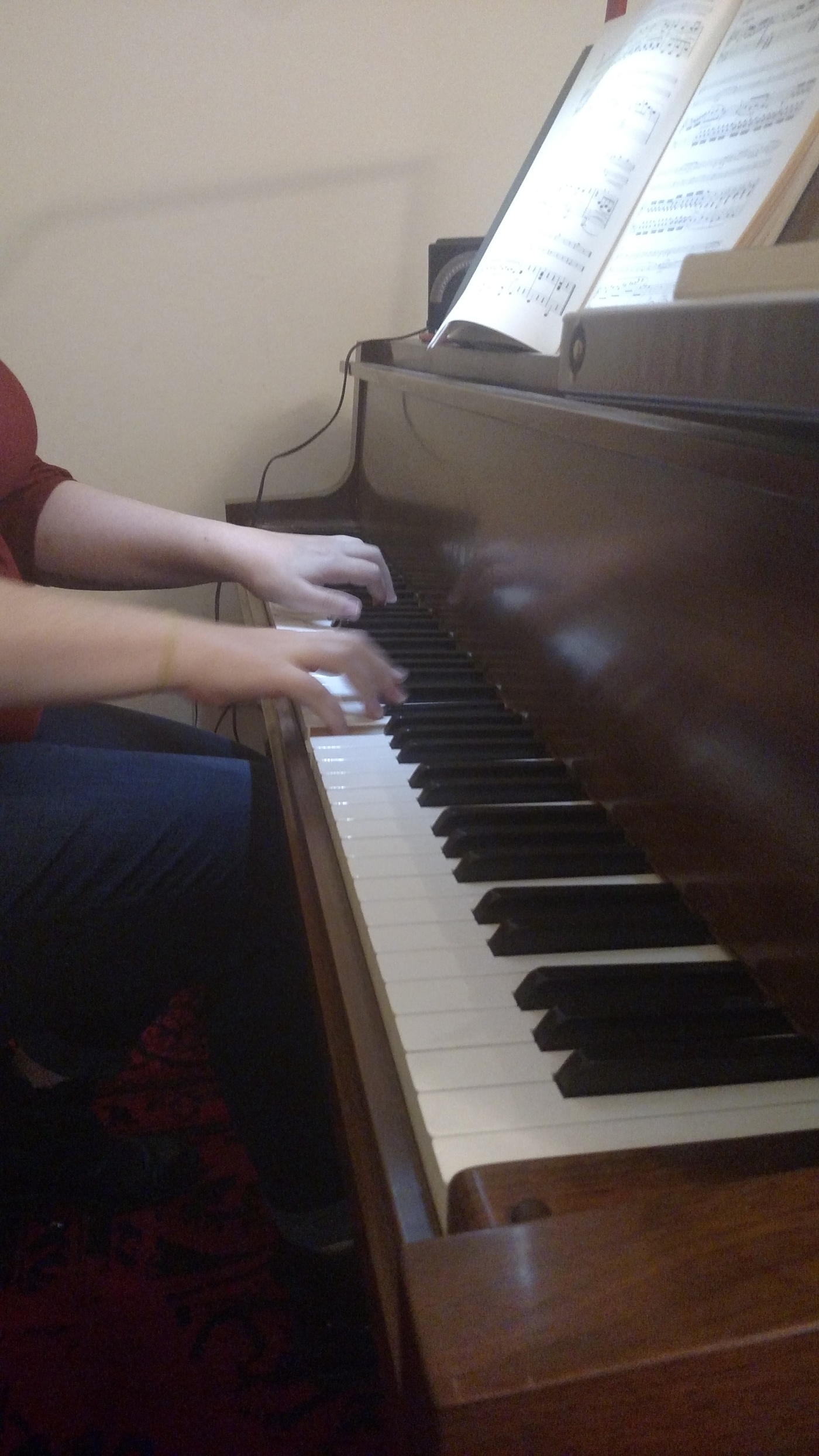 I’ve got Eine Kleine Nachtmusik playing tonight, as I often do in the evening. My dog Dudley is curled up in the armchair, fast asleep. When the music becomes more energetic, Dudley whines. Some composers, like Rachmaninoff and Chopin, make Dudley throw back his head and howl. Tim thinks he’s singing along. I think it’s complaint.

When we lived with my piano, Dudley liked to lie beneath the baby grand. When I’d start practicing, the sound would get too much for him and he’d crawl out. He’d only howl for minor keys, looking at me as if I’d offended his musical sensibilities. Major keys only. Got it.

I was surprised when he started howling along with music coming from the speakers, but realized he was only singing along with piano music, not guitar or symphonic or vocal. In his way, I guess, he misses the piano too.

We’re moving right now. By the end of the month, we will have left our hillside perch for a lower elevation, a quiet two-bedroom situated next to a creek. I’m relieved to be away from the danger of landslides, though I will miss this view. I’ve been so lucky for the past four years to get to see mountains every morning when I get up. What a wonderful introduction to living in Oregon.

This apartment was never meant to be our permanent home. It was the place Tim found in our price range on short notice, a choice between this wheelchair-inconvenient place on a bus line and a wheelchair-inconvenient place half this size also on the bus line. We have loved living here, except for theft of my daughter’s independence, and the decision to leave has been difficult.

Our new view is less impressive, but there is the sound of peeper frogs in the evening, and the whole apartment — from entrance to bathroom — is on the same level as the parking lot, which will allow my daughter to visit without needing to be carried up and down two flights of stairs. That’s a big relief for me. Perfect timing too; she’s just about living on her own now, and hardly ever comes to Portland anymore.

The best part came the other day, when Tim said, looking at our budget, that we might be able to get the piano out here this year. By Christmas. We’re saving money with this move, and our car will be paid off next month. By Christmas I might have my piano. It’s still only a possibility, but it’s a possibility that makes my heart race. To be able to live with my piano again would put that missing piece back in place.

The lack of a piano took me to the Community Music Center in search of a place to practice. Finding CMC led me to a job at CMC, which led me to a job at Multnomah Arts Center, which has led me to more world-expanding introductions. If I’d had my piano with me, I would never have met any of those people, so I’m glad for what its absence has given me.

But I will be glad when I have the Estey under my hands once more, its old frame holding all those hours of practice time, the discovery of Gershwin and Brahms, the exploration of my singing voice among my mother’s Broadway music books. My mother played this piano too; she bought it when I was small, and as my use and interest in it waxed, hers waned. She was a better singer than pianist, which is saying something, because she was quite a pianist. Familiar as she was with the repertoire, she’d critique my practice sessions, yelling from the kitchen, “Slow down! It’s not a race!” I still hear her when I rush a piece, fumbling over my own fingers.

I had the piano in my house for ten years before having to leave it behind in Chicagoland. In those ten years, I taught piano to neighborhood kids, an occupation that brought me such joy. I miss those kids, and the conversations we’d have between primer pages. They’re almost all in or finished with high school now, time marching as it does.

Those tiny hands left their mark on the piano too. Echoes of “Twinkle Twinkle” and “Turkey in the Straw” and “Iron Man” live in the wood. I want those reverberations close to me again. I want my hands on those keys, my keys, where I could go when words failed me, and count on the notes to say what I couldn’t figure out.

Today I have a piano teacher of my own, another someone I discovered at the Community Music Center. My playing is demonstrably better than it was the last time I lived with the piano, though it’s still not where I want it to be. Later this year, perhaps, I’ll be sitting at those keys again, that piece of my life back in place where it belongs, my hands touching where my mothers hands have been, and my students’ and the loving hands of my gracious friend who has watched over the instrument since I left.

When I play that piano again, like Dudley, I will howl.

One thought on “Piano”