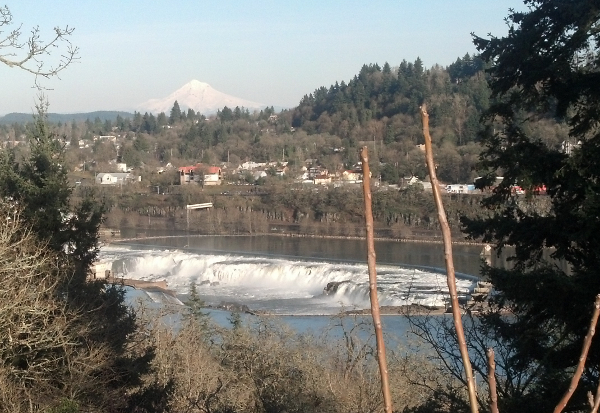 On the train on the way home tonight, I saw graffiti on the wall behind a fire escape of one of the apartment buildings near the tracks. The graffiti, beautifully drawn, read simply “Air”. It seemed to me like a cry for something not easily found in the city, desperation for relief from the confines of the city.

Whenever I see the city from the train, I realize how little I want to live in the city. I love Chicago–my family is tied to this place–but I don’t ever want to live in this city or any other. I’m drawn into nature, compelled toward trees and sky.

My mother was a city girl. She lived on the South Side of Chicago in St. Sabina’s Parish. She spoke of it all the time; the insular nature of the parish, a multi-block area defined by the Irish families who attended her church. Everyone she grew up with was Irish Catholic, like her. The Italian neighborhood was nearby and she knew the, but they weren’t family. There was a Jewish neighborhood that she spoke of fondly, but again, they were not part of her world. She described their distinctions so vividly that when I was small, I imagined walls around her parish, like a fortress.

Everything in her life was within walking distance, though her stern father reportedly didn’t allow her to cross the street until she was 16. I believe she openly defied him on this and other points.

She married my father, a Wisconsin farm boy transplanted to Chicago by way of the U.S. Marine Corps, and they began their life together living in the city. They both worked at the Chicago Daily News, and living in the city made sense. But very quickly came children and job changes, which led to homes successively further out from the city. I was their youngest, born in their third or fourth home, and when I was five years old, we moved out as far west as you could live and still be considered part of suburban Chicago. It’s only 40 miles away, but at the time, it was as different from the city as it’s possible to be.

Mom wanted us to grow up in the country, climbing trees and riding bikes and swimming, all activities I’m not sure she ever participated in. This was her childhood ideal, and she was fiercely proud of having given us that.

I know how she missed the city, her city, her neighborhood. I think on some level she wished that we also had that parish experience. But what she gave us made me a completely different person from who she was.

I spent most of my childhood outside–and alone. I’m not complaining about that; my daydreamer nature has always tended toward solitude. Reading books and writing stories are activities best done alone. I would take a backpack full of books, notepads, pens and a lunch and spend long days in the crook of a tree, deep in the woods behind my house. When I was finally old enough, I rode my bike into town, a rather dangerous trip even now, as most of the route is single-lane roads with narrow shoulders and no sidewalks, and we didn’t have helmets. I would ride into town to my beloved library, where the most potent treasures awaited, and then take my borrowed loot and sit down by the river and read away hot summer afternoons.

I did play with neighborhood kids, and my siblings. There were long games of Kick the Can and Smear the Queer (yes, that’s what we called it, but I have no recollection of why, or what the rules were. What a horrible word for children to use.) We swam, played basketball, and I learned the mechanics of baseball, but our neighborhood lacked requisite space for a ball diamond. I slept over and friends’ houses and had friends over. But in my memory, my predominant activities were outdoors

And now my desire for open spaces has taken over. I feel trapped and caged in the suburbs, mercilessly encroached upon. I have little patience for the presence of other people, so focused am I on my need to be apart. I’ve always known my life would be sought out west, as the country to the east is too heavily populated to allow me the wing-expanding space I need.

But there’s more; there’s my fear of the small measure of good and wholesome and real being eaten by concrete and streetlights; that what’s native to who I am, the kernel of who I am is at risk for being lost, neglected, murdered by a lack of fresh air and an excess of exhaust.

One of my favorite books growing up was A Tree Grows in Brooklyn. Francie, a good Irish girl, spent days dreaming pondering the lone tree growing outside her tenement window. She saw the tree as a sign of hope–that in spite of the squalor and mean circumstances, life could still grow, even flourish.

Whenever I see a tree struggling to grow in the city, I think of Francie. But, for me the tree isn’t hope. It’s a symbol of the futility of life in the city. Even in the most manicured neighborhoods, trees are limited to a human-designated amount of space. They can’t grow any larger than people will allow them to grow. If they start to exceed expectations, they are chopped down, lest they interfere with the plans of men.

Nothing natural or unplanned is allowed to thrive in the city. Everything must be confined to a space designated for it. Even the people, even my mother’s parish. How wonderful it would have been, I think, for my mother to have known like family the Jewish and the Italian kids living nearby. But she too was confined, contained to the Irish Catholic neighborhood.

To ramble, to explore, to discover boundless horizons, to seek and never finish finding, to expand beyond any expectations–even my own. How I long for such things.

And so I will move with my husband–the only constraint with which I am remotely comfortable–to a city that restricts *people* from encroaching too much on nature, to a place where the ocean–the endless ocean–is an hour away, to where, in spite of my residence in the smallest apartment I will have ever lived in–I can spread my wings and find out exactly where they’ll take me.